I’m a lefty and so is Helen.

Growing up I thought it was a great excuse not to help peel the potatoes with the right handed peeler. Nowadays tools such as peelers and can openers are made for left and right handers.

We’re often asked how or when will I know which hand my child will use?

Most children usually have a preferred hand typically established by around 3 or 4 years old, but sometimes it can be as late as 8 years old. Children like us sometimes use different hands for different tasks. For instance I write left handed but cut right handed. Babies and toddlers  often use either hands to pick up objects, usually just with the closest hand. Don’t be tempted to try to influence hand dominance, handedness reflects the wiring of the brain, so instead place objects in the middle of the space in front of the child and let them decide. As they begin to use a preferred hand they will start to refine hand and finger movements allowing skills such as cutting to improve.

We use two hands to read, write and even put socks on, so using two hands is still useful. 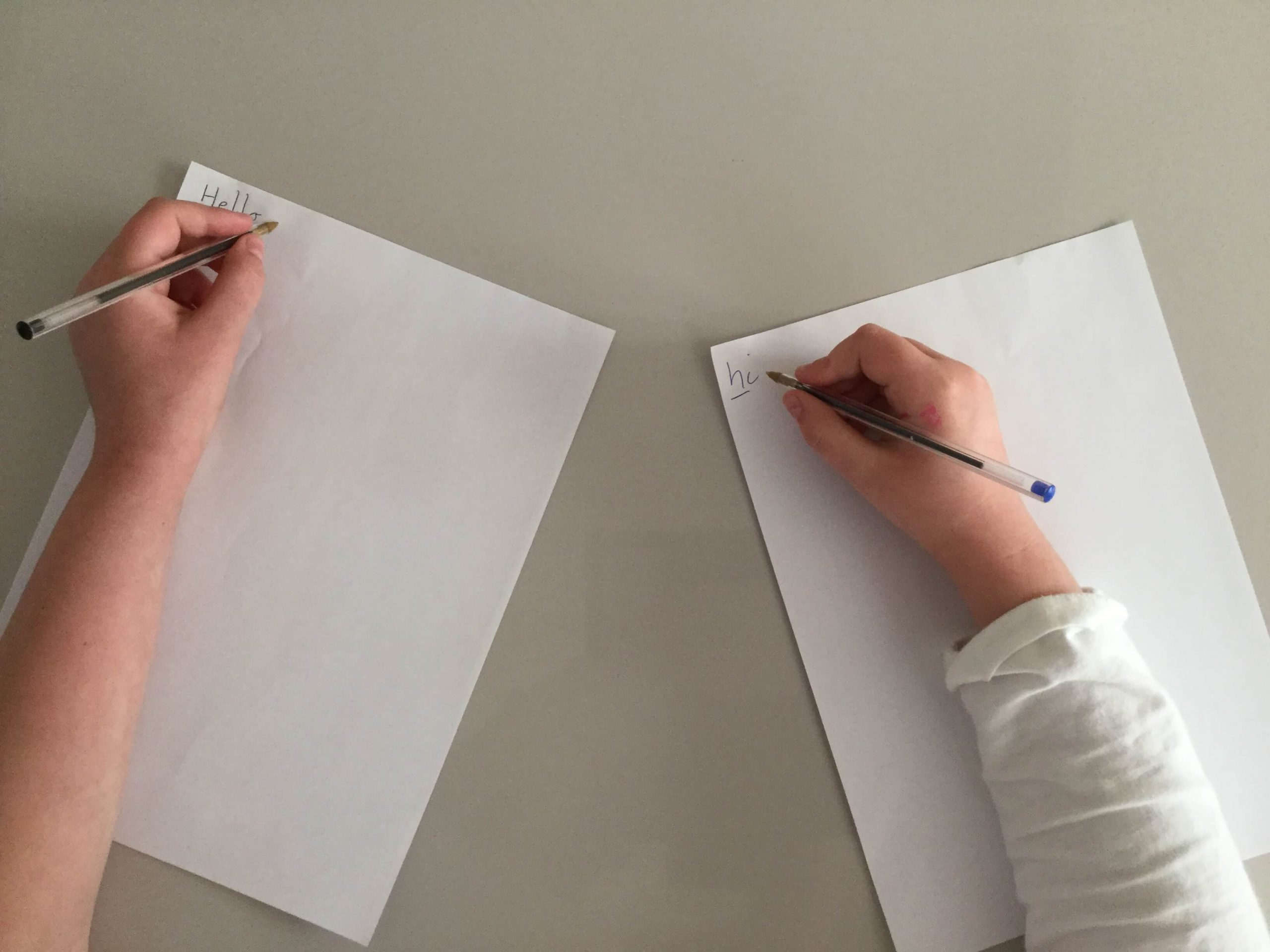 It’s tricky being left handed. Or is it?

Some things can be a little tricky but with a few adjustments you can really help your child.

Left handers have the harder task of pushing with writing tools instead of pulling like a right hander. This also means they often cover up their work or smudge their writing. To help with this the paper should be placed in the middle of the space in front of the child and then tilt the left side upwards slightly so that they will write downhill.  Also make sure the paper isn’t too close to them so that children are not hooking their wrists to see what they are writing. They may even benefit from having a sloped surface like an A4 folder sideways on to work on.

Hooked wrists mean the child will use their hand/arm instead of their fingers and this is tiring and can cause pain.

To help get a nice extended wrist let your child work on a vertical surface. Chalk or paint water on a wall, use an easel, taped paper on a wall to mark make, the side of a large box, washing the car, cleaning windows etc. They could even lie on their back and write on paper taped to the underside of a table.

How can I help my child?

Until they’ve begun to show a preference then lots of activities to strengthen both the hands such as catching a ball, playing with play dough, kneading dough, threading, sand and water play, construction toys, junk modelling, swings, slides, using musical instruments or just wooden spoons as beaters on a plastic bowl.

When they are beginning to use a preferred hand I’d remind them to think about which hand they find is better to clean their teeth, brush their hair, hold a pot when the other is putting things in.

The final thing to think about is something called the midline. Imagine a vertical line from the top to the bottom of your body. Children need to be able to reach across this line to read, write, eat and even put on shoes.

Play games where they have to touch parts of their body such as hands on opposite knee or collect objects by reaching across. Ensure they actually cross across the midline and not just twist their body to reach.

As a left handed person you are in good company. All these people are or were left handed. Leonardo da Vinci, Winston Churchill, Marie Curie, Prince William, Sting and my favourite Chewbacca the Wookie!

This website uses cookies to improve your experience while you navigate through the website. Out of these cookies, the cookies that are categorized as necessary are stored on your browser as they are essential for the working of basic functionalities of the website. We also use third-party cookies that help us analyze and understand how you use this website. These cookies will be stored in your browser only with your consent. You also have the option to opt-out of these cookies. But opting out of some of these cookies may have an effect on your browsing experience.
Necessary Always Enabled
Necessary cookies are absolutely essential for the website to function properly. This category only includes cookies that ensures basic functionalities and security features of the website. These cookies do not store any personal information.
Non-necessary
Any cookies that may not be particularly necessary for the website to function and is used specifically to collect user personal data via analytics, ads, other embedded contents are termed as non-necessary cookies. It is mandatory to procure user consent prior to running these cookies on your website.
SAVE & ACCEPT